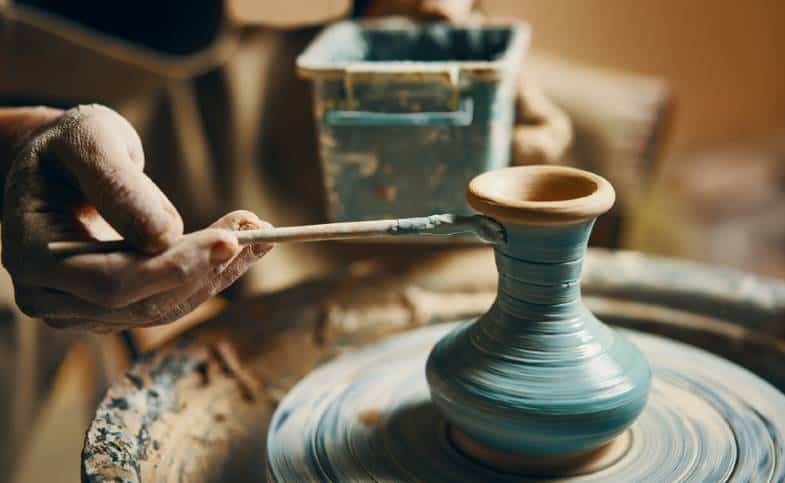 Glazing greenware used to be the norm.  However, more often, these days, pottery is fired twice.  It is bisque fired first to make it ceramic.  Then it’s glaze fired for decorative reasons and to make it usable as dinnerware or as a water-containing vessel.

A Brief Background on Glazing Greenware

In times gone by, glazing unfired clay was standard practice.  The two-step process of bisque firing clay followed by glaze firing is a more recent development.

Bisque firing was first recorded as being part of a two-step firing process in Persia somewhere between 900 and 1000AD (source).  It was developed to help the local sandy clay fit the tin glaze that was being used at the time.

Bisque firing was introduced in industrialized countries later as a way of boosting profits for large ceramic production companies.  Originally ceramics were produced by small local businesses with experienced potters who had the time and skill to raw glaze.

Then came industrialization and mass production, and the skill involved in decorating unfired greenware was too costly for manufacturers.  Bisque ware, which is easier to decorate on a mass scale, was introduced to save money on skilled labor.

In some areas, large companies would transport greenware to women working at home.  They would then decorate the pottery and it would be returned to the manufacturer.

However, bone dry clay is very fragile and a lot of the ware was damaged in transit.  This is another reason why the bisque fire was introduced.  It gave the pottery extra strength as it was shipped for decoration.

The benefits of bisque firing are as follows:

In spite of the benefits of bisque firing, some potters feel passionate about glazing greenware, or raw firing.  Some of the reasons they are committed to single firing are as follows…

So, bearing these advantages in mind, if you want to try glazing greenware, how do you go about it?  Read on to find out….

Here are some tips on glazing greenware, including making, glazing, and firing your pots.

What Clay to Use When Glazing Greenware

Single fired greenware needs to be quite strong.  There are a couple of reasons for this.

Firstly, you are handling the greenware more when you are glazing it, and greenware pottery is fragile.

Secondly, when glaze is applied to greenware pottery it absorbs water.  This can make the pottery soft and floppy.  If the pottery absorbs too much water or lacks strength it can collapse because of the water content.

There are a couple of ways to increase the strength of your greenware.  The first way is to choose a clay with some internal strength.

Clay that has a higher ball clay content tends to be stronger.  However, ball clay shrinks a lot when it dries out, this can lead to the glaze flaking off after application.  Grog can be added to clay to reduce the amount it shrinks.

So, clay that contains both ball clay and grog is a good option for single firing.

It’s worth noting that the single firing technique can be used on clays that fire at different temperatures.  Raw firing can be successful if you are using earthenware, stoneware, or porcelain clay.  Provided you are aware of some techniques that are adapted for glazing greenware.

Another way to add strength to pottery is to make the walls of the pot a little thicker.  Pottery with thicker walls is less vulnerable to breaking when you are handling the pottery during the glazing process.

Also, if the walls of the pottery are thinner there is more chance they will become soft when they absorb water.  If the walls are a bit thicker, there is more clay to soak up the water and retain some strength.

Another thing that can happen when you glaze greenware is that air pockets can form in the pottery walls.

In addition to this, the rims of pots are vulnerable to cracking when you are single firing.

One way to avoid this is to make avoid the rims being very thin.  You may have to experiment to find the best thickness for the clay you are using.  There is no definitive answer to how thick your pottery walls and rim should be.   Finding the right thickness of your pottery will be a matter of trial and error.

You have to adapt your glazing technique when you are glazing greenware.  You can’t, for example, use tongs when raw glazing.  Tongs would damage the fragile greenware.  And also, dipping pottery into glaze can increase the risk that the unfired clay will become waterlogged.

However, there are other ways of glazing that reduce water content in the glaze.  For example, spraying or airbrushing glaze onto pottery is a popular choice for glazing greenware.  This is because the glaze hits the pottery as a mist, and contains less water.

As such, it’s possible to raw glaze both sides of your ware without waterlogging the clay.

Alternatively, you can glaze your greenware using a brush and a banding wheel.  Rotating your pottery in the banding wheel as you glaze can help avoid handling the fragile greenware.

Glazing Leather Hard or Bone Dry Clay – Which is Best?

When single firing pottery, you can glaze leather hard clay or bone dry clay.  It’s best to experiment with the clay body and glaze you are using to see which works best for you.

One solution to this is to add extra ingredients into the glaze.  For example, adding around 2% of bentonite to the glaze can help.  Bentonite is a clay mineral that has fine particles that bind the glaze particles together.  It is also plastic and shrinks when it dries.

Adding a small percentage of bentonite can make the glaze more durable and less likely to flake and peel.  It also encourages the glaze to shrink in line with the greenware.

Whichever approach you choose, it’s important that the moisture content in the clay is even throughout.

It’s best to use glaze with a higher clay content when single firing.  The reason for this is connected to the issue of shrinkage mentioned above.

When greenware is glazed it absorbs water and swells up.  This is the case whether you are glazing leather hard or bone dry clay.  After the glaze has been applied the clay will start to dry out again.

As it dries it shrinks and the glaze can flake off as the clay dries.  Alternatively, if the glaze isn’t bonded well to the clay surface it can peel, flake, or crawl off during firing.

Glaze that contains the right content of clay will shrink at the same rate as the greenware.  This will help avoid the problem of glaze cracking and flaking when it’s fired.  The question is, what is the ideal clay content for the glaze?

Adding clay to a glaze is a balancing act.  Glaze with a very high clay content will stay wet longer when it’s applied to greenware.  This increases the risk that the clay will become waterlogged.

But insufficient clay will lead to cracking and flaking as the clay dries.  So, the clay content needs to be finely tuned.  Steven Hill recommends using a glaze with between 5-10% clay.

Many variables affect what a glaze will look like once it has been fired.  And most potters who practice single firing recommend testing clay and glaze combinations to find what works for you.

Some potters find that they can use their normal glazes when single firing, without having difficulties.  Having said that, it’s generally recommended that very shiny glazes with low clay content don’t work well when single firing.

During a bisque fire, water evaporates from the clay, and organic carbonaceous material is burnt out.  When you are single firing, these processes still need to happen.  And they need to occur before the glaze starts to mature and form a seal across the pottery.  If glaze starts to mature before all the moisture and gases have escaped, you will get glaze defects.  This can include bloating, blisters, and pinholing.

Therefore, when you glaze greenware, the first part of the firing schedule needs to be slow.  The changes the clay undergoes during a bisque fire need to occur at the start of the single firing process.

Preheating the kiln or candling can help.  This ensures that the clay is as dry as it can be before the firing schedule starts.  Similarly, once the firing is underway you can monitor the moisture levels in the kiln using a mirror.  Hold a small mirror just above an open peephole on the kiln.  If the mirror mists up then moisture is still being expelled from the pottery.

Another recommendation is that you keep the peepholes on the kiln open during the first part of the firing process.  This allows gases to leave the kiln as carbonaceous materials are being burned out.  Also, organic material can only burn out when oxygen is present in the kiln

Once the temperature in the kiln has reached 1940F (cone 04) the firing process can proceed as per normal.

There are lots of reasons why glazing greenware has an appeal.  Some of these reasons are practical, to do with the time and expense involved in two-step firing.

Other reasons are aesthetic creative decisions.  One of the often-cited reasons for single firing pottery is that the process is more organic and immediate.

Bisque firing is the norm for most potters and learning to glaze greenware does involve learning new skills.  However, most potters who try glazing greenware become passionate advocates and don’t look back once they have made the switch. 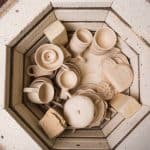 What is Fired Clay Called? – The 3 Main Terms For Fired Clay 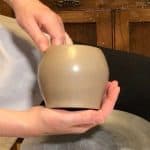 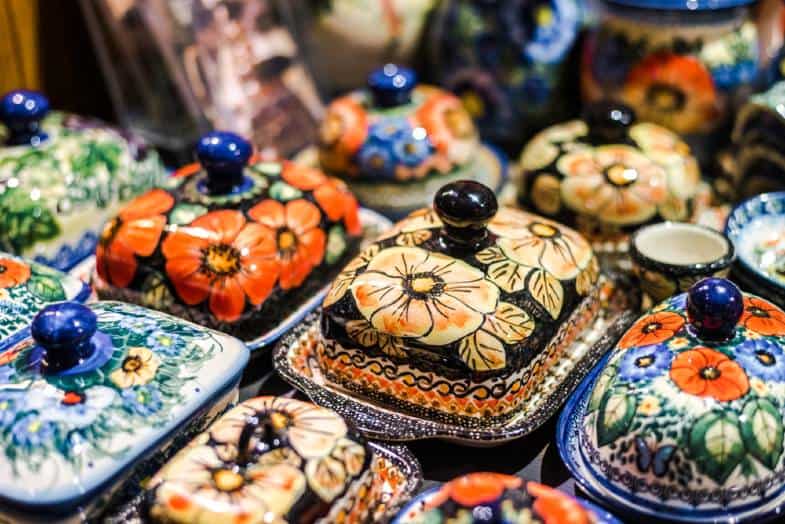 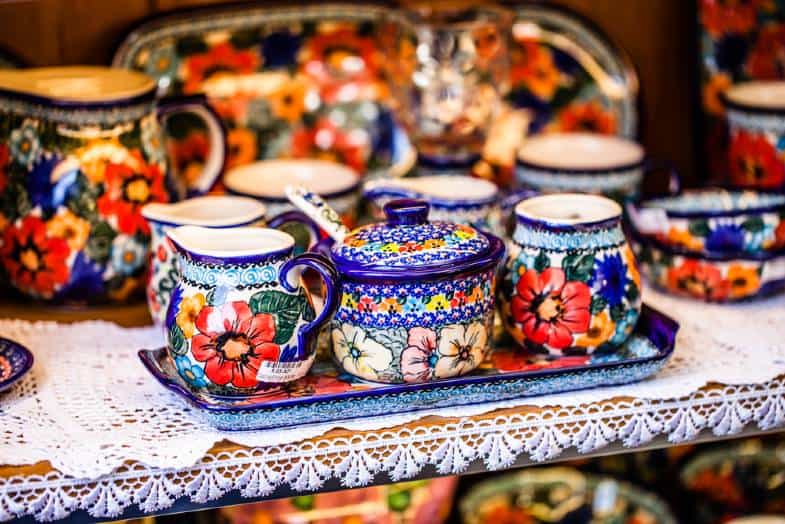 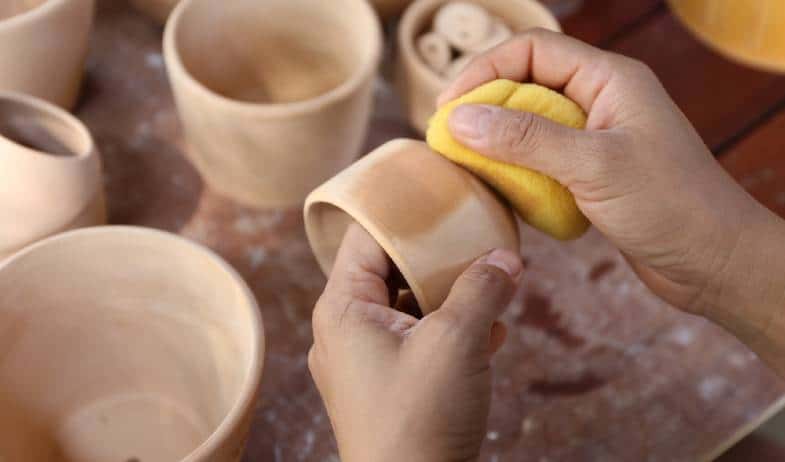