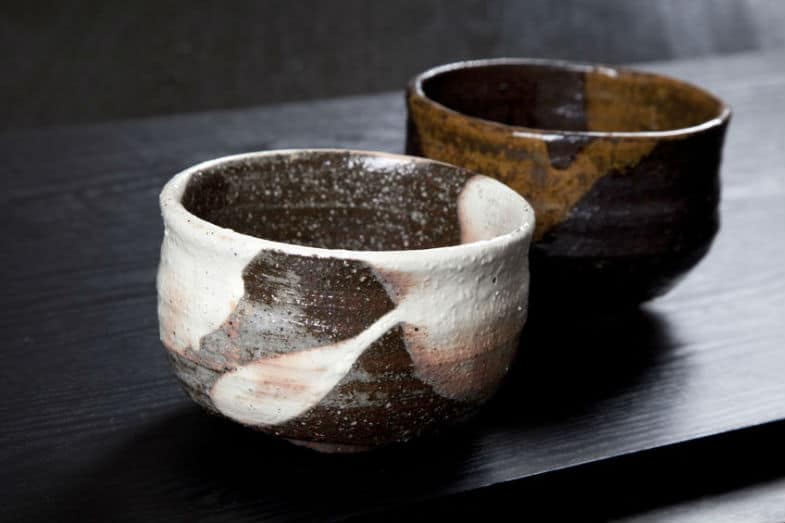 What is Grog in Pottery?

If you have heard potters talking about grogged clay, it may have left you thinking about a festive alcoholic drink.  This is not however what is meant in the world of ceramics.  So, what is grog in pottery?

Grog is a granular material that is added to pottery to give the clay useful properties for building, throwing, and firing.  Mainly grog adds strength to pottery, reduces shrinkage and cracks and adds texture.  There is a range of grogs, categorized according to how fine or course they are.

What is Grog In Pottery? - An Overview

It can also be made from ground up brick and other refractory rock.  ‘Refractory’ simply means that the material is resistant to melting and can survive high temperatures.

Grog can be added to almost all types of clay.  The type of clay that is being used will determine the type of grog that is suitable.  Grog can be categorized in a couple of ways.

Soft grog is generally used because it is porous and will reduce stickiness in a clay body.  However, because it has only been fired up to cone 10, if the piece of pottery is fired above cone 10, the grog will melt.

Hard grog is made of ceramic that has been fired above cone 10.  This means it is much more robust.  Because it is fully mature, it is unlikely to melt before the piece of pottery is completely fired.  For this reason, hard grog is more commonly used than soft grog.

Another way of categorizing grog is according to the size of its granules.  Some fine grogs look like powder.  Other grogs with larger particles look like granules of sugar.  Grog is graded according to a ‘mesh’ system.  This system refers to the number of holes per inch in a piece of mesh.  So, for example, ’48 mesh’ refers to a piece of mesh that has 48 holes per inch.

Grog can be given a single mesh number.  For example, it may be classified as 150 mesh.  This means that there are 150 holes per inch in the mesh.  It also means that the grains of grog are small enough to pass through holes this size.  Grog that is 150 mesh consists of grains that size and smaller.

The range system is useful because it lets the potter know what the smallest and largest grain will be.  This gives them more control over the properties the grog is introducing to the clay.

By contrast, if the grog has a single mesh number, the grains may be anything up to the mesh size specified.  It is recommended that 30/80 mesh suits the purposes of most pieces of pottery.

Are All Grogs Equal?

It is not always possible to predict the effect that grog will have on clay.  This is because there can be big variations even with the mesh range system.  Grog made by different companies, with the same range can be quite different.

This means two grogs with the same range of grading may affect the pottery differently. Therefore, it is a good idea to experiment with the effect that a particular grog has on your pottery.

What is Grog In Pottery? - The Ingredients

Alumina has a high melting point.  It also has a high mechanical strength and can tolerate a lot of wear and tear1.

Silica is a glass-forming component in clay and glazes.  But more than that it plays a central role in the structure of clay.  It is the ‘skeletal structure2’ of the clay.  Clay components attach themselves to silica.  Silica, therefore, makes clay stronger by improving its structural integrity.  Silica also helps to regulate how much pottery shrinks when it dries, and when it is fired.

What is in Grog?

Why is Grog Added To Clay?

Having looked at the question of what is grog in pottery, let’s take a closer look at why it’s used.  Grog is a ‘temper’.  The term ‘temper’, when used in ceramics, refers to a non-plastic material that is added to clay.  You may hear the term ‘grog tempered clay’.

When a non-plastic ‘temper’ like grog is added to clay, it can have the following outcomes:

Adding grog to your clay will...

Let’s have a look at those items in more detail…

Grog reduces how much clay shrinks as it dries out and also as it is fired.  The more grog that is added to the clay body, the less it will shrink.

It shrinks less when it dries out before going in the kiln because the grog particles have already been fired.  Therefore, they have a lower water content in the first place.  So, they lose less volume as the clay dries out.

Also, when ungrogged clay dries out the particles move closer and the distance between them reduces.  By contrast particles of grog produces a porous matrix4 that does not shrink as much.

Grog also enables clay to dry more evenly because of its porosity.  The open spaces between the particles allow water to migrate to the surface and evaporate more readily.

When a piece of pottery is fired, it shrinks for a few reasons.  One of the reasons it that it loses more water.  But it also loses volume because of vitrification.   At a certain temperature, the silica in the clay will interact with other properties and form liquid glass.

The glass-forming substances leave the clay particles and fill up the gaps between the particles.  This causes a bit of shrinkage.  Because the grog has already been fired to maturity, it does not melt.

If the kiln becomes hotter than the temperature that the grog was originally fired at, the grog will melt.  The melting point of grog is normally around 3240F (1780c)

One of the main reasons that clay cracks is that the clay body is stressed when it shrinks.  By reducing the amount that the clay shrinks, the grog also reduces the chance that the pottery will crack.

In addition to this, grog reduces thermal expansion.  When pottery heats up in the kiln, it expands.  The expansion is only a tiny amount, however, because the ceramic is brittle by this point, a tiny expansion can cause it to crack. 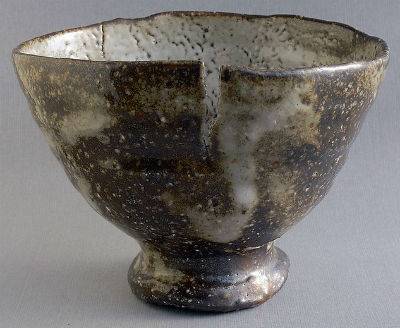 However, grog has already been fired and gone through the process of expanding in heat.  Therefore, it reduces the amount the pottery expands and reduces the chance of cracks occurring.

It is sometimes said that grog makes clay more workable because it improves the clay’s plasticity.  However, this is not correct.  Plasticity is the clay’s ability to be stretched, worked and pulled into shape without cracking.

Grog, on the other hand, is a bit like internal scaffolding in the clay that stops it from slumping.  It adds structural strength.

One comparison that helps me to visualize the role of grog in clay is that of wattle and daub.  Do you remember learning about wattle and daub in high school?  From as far back as the stone age, buildings have been made from wattle and daub.

Mud is mixed with straw and other debris and then pressed between wooden battens to make walls.  The straw is added to the mud to give the mud rigidity and strength and to stop it slumping.

Although it is not an exact comparison, grog acts a little like wattle and daub.  A clay particle is typically 10,000 mesh, whereas a medium-sized grog is 20-48 mesh5.  So, grog particles are huge compared to clay particles.  If you bear this in mind, it really is like adding a handful of straw and debris to mud.

Although grog makes clay more workable, it reduces plasticity.  Plastic clay is stretchy and bendy.  However, if you add grit to a substance, it will make it more granular and less stretchy.

Adding grog to clay can give it a gritty texture.  This texture is sometimes called ‘tooth’.  Potters refer to grogged clay as having a ‘toothy’ quality.

All clays have grog in them, and some clays naturally have more grog.  Earthenware, for example, has more grog than porcelain.   This accounts for its gritty surface.

None the less grog can be added to porcelain.  Most grogs have a high iron content and are not used in porcelain.  This is because the iron affects the white color of the porcelain.

However, a substance called Molochite can be used as grog in porcelain.  Molochite is made of kaolin, a white clay, that has been fired at a high temperature.  It is a clean grog with a fine mesh of 120.  Also, it is glassy and white when fired, so it does not compromise the texture of porcelain.

You can compare the ingredients of Molochite below, with those of standard grog above.

Because most grog gives clay a gritty texture, it can feel rough on the hands when the clay is thrown on a wheel.  Whilst this might feel like a chance to get a free exfoliation, it is not good for your skin in the long run.  However, if a 20-40 mesh is added to clay that is very plastic, the resulting mix can feel quite smooth6.

It strikes me that grog is versatile.  It can give you that rough textured rustic look.  However, there is a big range of types of grog.  Finer grogs give you the benefit of reduced shrinkage and reducing the chance of cracks without losing your smooth finish.

The answer to the question what is grog in pottery lies in its versatility.  Grog is a way of tempering your clay and giving your ceramics the best chance of surviving the kiln unscathed.

It is worth pointing out that some potters make their own grog.  Whilst a homespun approach is not an exact science, it is a money-saving option.  Here is a charming video of grog being made DIY style. 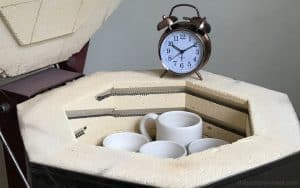 How Long Does a Bisque Firing Take? – 6 Factors at Play

When I first started firing my own pots, one of my questions was how long does a bisque firing take?  This can be a pressing 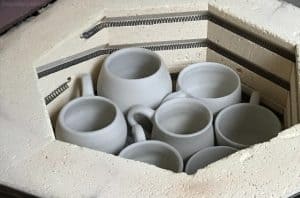 When I first got my kiln, I had no idea how to use it.  The first hurdle was to learn about firing greenware to bisque.

The Pottery Wheel is a participant in the Amazon Services LLC Associates Program.  This is an affiliate advertising program designed to provide a means for site to earn advertising fees by advertising and linking to Amazon.com.  I may also get a commission from other affiliate programs.
Scroll to Top