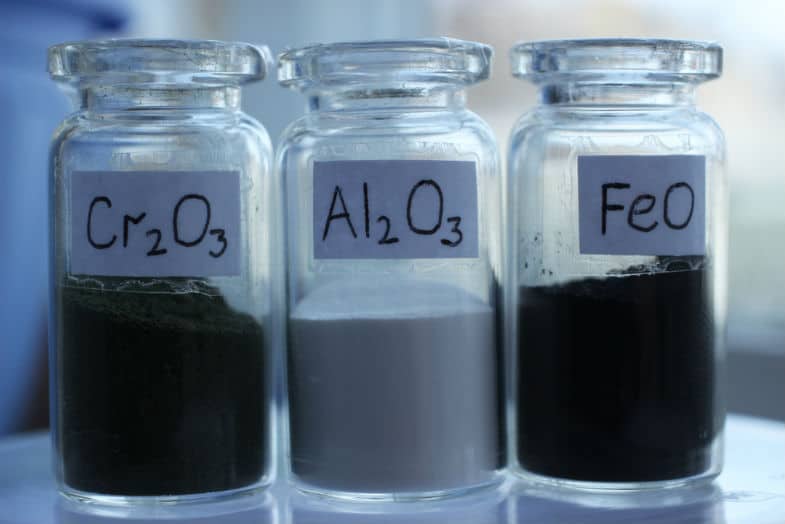 The Difference Between Oxides and Stains in Pottery

The terms oxide and stain, or ‘ceramic stains’ are often used interchangeably by potters.  If you are new to the exciting world of ceramic pigments, you may have wondered what oxides and stains are.  Perhaps you have pondered on the difference between oxides and stains and been left none the wiser.  This article is all about some of the properties that oxides and stains share, and how they differ.

Raw or plain oxides are metal elements that are combined with oxygen.  They are ground to a powder and one of their uses in pottery is as a colorant.  Ceramic stains are a mixture of metallic and ceramic oxides, plus coloring dyes that have been heated, quenched and ground up.

It is often said that ceramic stains are simply more refined or processed versions of raw oxides.  Here is a closer look at the difference between oxides and stains used in pottery and ceramics.

What are Oxides in Pottery and Ceramics

Oxides are used in pottery and ceramics for a number of reasons.  They can be used as fluxes, glass formers, and colorants.

Fluxes lower the temperature at which a ceramic body melts when fired.  Some examples of fluxing oxides are lead, sodium or zinc.

Glass formers are oxides such as silica.  They contribute to the formation of glass as clay or glaze heats in the kiln.

Both fluxing and glass-forming oxides can also alter the color of the substance they are added to.  Typically, in ceramics, coloring oxides can be added to glaze, underglaze, slips or directly to clay bodies.

Oxides are raw materials.  They are binary compounds.  What this means is that they are made up of just two elements.  They consist of at least one atom of oxygen, plus one other element.  Some oxides contain more oxygen than others, and this affects how they behave.

Although raw oxides are basic elements, they do contribute different properties to glazes.  For example, oxides can determine how tough a fired glaze is, or how much it shrinks or expands during firing.  As well as affecting the color of a fired glaze they can determine whether it is matte or glossy.

Because metallic oxides are raw materials, their behavior can be less stable than highly processed materials.  As such, the color of a metallic oxide can be very different from its color once it has been fired.  That is why glazes are often a different color once they come out of the kiln.

What is the Difference Between Oxides and Stains:

The main difference between plain oxides and stains is that ceramic stains are a more refined version of raw oxides.

The metallic and ceramic oxides are mixed up and heated to the point that they melt and fuse.  These are then quenched and ground down into a powder.

This process is essentially how frit is made in ceramics.  Frit in glazes makes glazes more stable.  They also have lower melting temperatures and a lower number of defects.  In addition, frit creates smoother finishes and brighter colors2.

Some of the Benefits of Using Ceramic Stains

Stains and oxides are very similar but there are some advantages to using stains.  Some of these advantages are as follows…

Ceramic stains are sometimes described as fritted colorants3.  Because ceramic stains have undergone a fritting process, they are generally more stable to use than raw metallic oxides.  As such, the color of unfired ceramic stain is very close to its color once it’s been fired.

Another reason ceramic stains don’t change color when they are fired is that coloring dyes are used in their manufacture.

The fritting process and the addition of coloring dyes mean the color of stains can be bright.  The difference between oxides and stains in this respect is that plain oxide colors are more muted and organic looking.

Fritting also makes helps in making substances non-toxic, and less soluble.  This gives ceramic stains the advantage of being safer to use in pottery.

That being said, some manufacturers of ceramic colorants will state that they cannot guarantee that their products are food safe.  Pottery materials like glazes, underglazes, and stains may be non-toxic at the point of sale.

However, how safe they are once they have been used on a piece of pottery depends on other factors.  These factors include, amongst other things, what materials are used in conjunction with and how they are fired.

3. Stains Come in a Wide Range of Colors

Because ceramic stains are made by mixing a range of oxides with dyes, the range of available colors is broad.  Some of the colors available as a ceramic stain would be hard to create by blending plain oxides.

Basically, the manufacturer has done the hard work of creating the particular color you might be looking for.

Here are just a few examples of ceramic stain colors by Ceramic Supply USA.  They have a good range of colors, that can be blended together to create whatever shade you want.  And they are reasonably priced.

What is the Difference Between How Oxides and Stains are Used

In short, oxides and stains can be used in very similar ways.  They are both quite versatile ways of coloring ceramics.

Some potters will use oxides and stains suspended only in water.  However, some plain oxides like cobalt and chromium oxide and some ceramic stains are quite refractory.  This can cause problems with adhesion.  If the oxide or stain is simply suspended in water it can fail to adhere fully to the pottery.

Also, if you apply a glaze on top, the colorant may stop the melted glaze from sticking to the surface.  This can lead to crawling in the glaze, where the glaze balls up and rolls off the surface.  As a result, oxides and stains are quite often mixed with a flux like gertsley borate.

Enough flux needs to be used so that the stains and oxides will melt and be suspended by the glaze.  However, the mixture should not melt so much that the colorants bleed into the glaze.

A simple rule of thumb is that the pigment you are using is mixed with an equal amount of flux.

Some of the Ways That Oxides and Stains can be Used:

Oxides and stains are versatile.  Any kind of colored ceramic will have been colored using either or both stains or oxides.  Here are some ways they can be used…

Applied to Greenware or Bisque?

Some potters spray or paint them onto bone dry clay and allow the dampened surface to dry again before firing.

However, it is more common practice to apply them to bisque fired clay.  They can be applied with a brush as a wash, or dipped.  If you are dipping into the oxide or stain, make sure it is well mixed before you dip.

Once the piece has been dipped, wiping the surface of the pottery will highlight its texture.  By wiping, you are removing some stain or oxide from the raised surfaces.  At the same time, the colorant in the recessed areas is pushed into the bisque pores.  This intensifies the color and you get a good contrast between dark recessed areas and lighter raised surfaces.

Alternatively leaving the stain or oxide with an even application will create an opaque colored finish.

To Glaze or Not to Glaze?

Stains and oxides can be fired on their own, or a clear glaze can be applied on top.  Oxides interact differently with each other, so if you apply a colored glaze, you may get some unexpected results.

Coloring oxides and stains can be mixed into slips, underglazes, and glazes.

They can also be mixed in with a clay body.  Some coloring oxides are not suitable for doing this, but others are specifically designed to be used in this way.  Mason stains are a good example of the kinds of ceramic stains that can be used to color clay.

They are simply wedged in to create a clay body color of your preferences.  This is great for nerikomi (also known as agateware).

Stains and Oxides on Top of Glaze?

If the stain or oxide has been mixed with a flux it can be painted on top of unfired glaze.  This is known as the majolica technique.  When the piece is fired, the stain and flux mixture will melt into the glaze.

When using this technique, it is a good idea to use a white base glaze.  The reason for this is that the oxides can interact with the oxides in colored glazes creating unwanted colors.

Because raw oxides are not fritted, they are more likely to be soluble and toxic.

Some raw oxides, such as copper and zinc are volatile, which means they vaporize readily4.  When they vaporize, they give off noxious fumes.  Toxic fumes from oxides like manganese5 are dangerous to inhale.  Also, the fumes can be absorbed into the interior surface of the kiln.

Because plain oxides are less stable than ceramic stains, they are more likely to react to oxides in glazes.  As such oxides can affect the color of glaze creating unwanted colors.  For example, chrome oxide will react with tin in a glaze, turning a white glaze pink6.

Because of the problems sometimes encountered with raw oxides, it’s often recommended that potters use ceramic stains.

However, stains are not without their limitations, and here are some of the issues that need to be considered:

In one way, the difference between oxides and stains in pottery is quite simple.  Stains are simply oxides that have been processed to make them stable and to provide a wider range of colors.  However, oxides have multiple uses in ceramics, whereas stains are largely used as colorants.  Also, the chemistry behind how oxides and stains behave is complex, and perhaps best left to the chemists amongst us.  That would be an interesting Venn diagram – I wonder what the cross over between potter’s and chemists looks like! 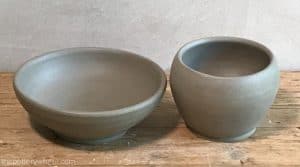 What is Leather Hard Clay? And Why is it so Useful?

Before it is fired, clay goes through three distinct stages.  The first stage is when it is soft, plastic, and workable.  The second stage is 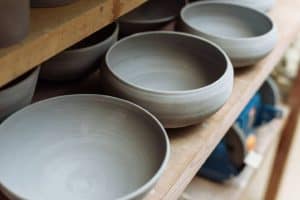 Low Fire Vs High Fire Clay – Which Clay is Right for You?

There are lots of different types of clay for pottery.  One of the ways that pottery clay is categorized is the temperature it should be