Can You Use Underglaze on Top of Glaze – Does it Work? 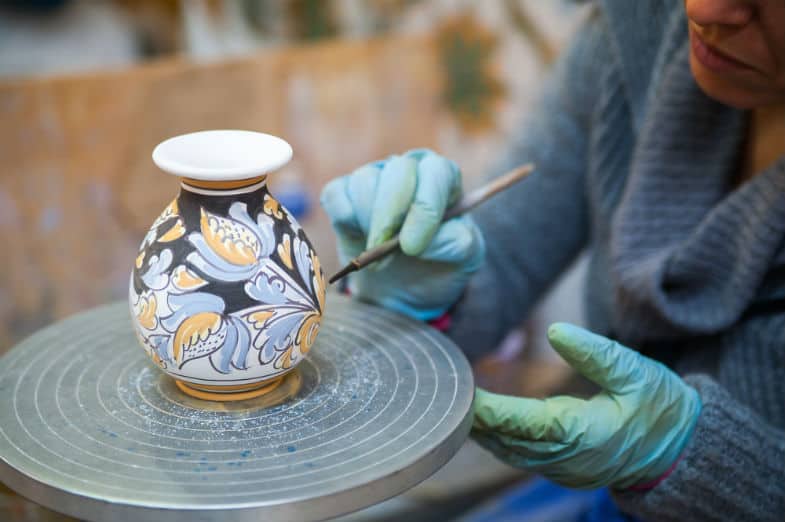 Underglaze is pretty versatile.  There are a seemingly limitless number of underglaze techniques.  If you have been experimenting with underglaze you may have wondered if you can use underglaze on top of glaze.  Faced with some glazed pottery that I wasn’t happy with I found myself wondering the same thing.  And this is what I found out…

Not all underglazes respond well to being used on top of a glaze.  They can peel and blister.  However, certain underglazes and coloring oxides can be fired successfully on a base glaze.  Majolica ware is made this way.  You can make or buy underglazes that can be used like this.

Using Underglaze on Top of a Base Glaze – Yes or No?

It would be nice if the answer to this question was a simple yes / no answer.  However, like many things in pottery, it’s a little more complicated than that.

Some potters say quite emphatically that you can’t use underglaze on top of glaze.  They state clearly ‘the clue is in the name’, underglaze goes under glaze.

And it is true that if you apply underglaze on top of glaze you can encounter problems.  Some of these problems are that the underglaze can peel off the glaze.  At other times the underglaze will blister and look scorched.

However, there are other potters that manage to use this underglaze technique with success.  So, how are they managing it?

Well, the truth is that it is a matter of how the underglaze and glaze behave when they are fired.  And how they interact with one another too.  It also depends on what temperature you are firing too.

Potters will sometimes share their successful combinations of underglaze on top of glaze.  I will give some examples of these combinations below.  However, if you are experimenting with your own underglaze/glaze combination, the advice is to do a test run.

There are a number of variables at play in whether this technique works.  Until you run a test piece you won’t know if your particular combination of underglaze and glaze will work.  The potter’s motto is often ‘test, test, test’, and see what works.

The History of Putting Underglaze on Top of Glaze

There is a long tradition of painting decoration on top of glaze called ‘majolica’.  This technique has been around since the 15th century and has been practiced in different ways over the years.

However, when potters now refer to majolica they usually mean a technique applied to a low fire earthenware clay.  The bisque fired earthenware is covered with an opaque white glaze.  Then, decorations are painted on the unfired white glaze using either stains or glazes.

Majolica is often cited as an example of successfully using underglaze on top of glaze.  However, in some ways, this is not strictly true.  It depends on how you are defining underglaze.

Underglaze is something that has developed over the years.  Originally underglaze was much like a colored slip.  It consisted mainly of clay particles suspended in water and colored with a stain.

However, over the years, underglazes have been developed and many now include other glass-forming ingredients.  These melt when the underglaze is fired.  Therefore, often underglazes behave a bit more like glaze than slip when they are fired now.

In spite of this, potters will use the term underglaze to refer to different substances.  For example, sometimes underglaze refers to a mix of clay, flux, and stain.  At other times, underglaze is also used to refer to a coloring oxide mixed with a decorating medium like CMC gum.

So, some people have a narrow definition of underglaze.  Other potters have a broader definition, including even stains used on their own.  The point is that different substances will respond differently to being applied on top of glaze.

If an underglaze has a high clay content, this can cause problems when it is used on top of glaze.  However, if you are using a stain mixed with little or no clay as an underglaze, then this is not an issue.

Applying Underglaze on Top of Fired or Unfired Glaze

The other question is whether you are applying underglaze on top of clay that has been fired or not.

Most majolica underglazes are actually stains mixed with glass-forming ingredients and fluxes.  Fluxes are substances that lower the melting point of the glass formers.  As such, when the pottery is fired, the majolica underglaze melts into the white glazes that it is sitting on.  This is called inglazing.

Underglaze that has a high clay content can interact badly with glaze as the glaze melts.  Underglazes that have a higher percentage of flux behave more like glazes and are more successful when inglazing.  Amaco Velvet underglazes are reputed to cope well was a majolica underglaze, as are Mayco Fundamentals Underglazes.

Another approach is to paint your underglaze onto fired glaze.  Again, the success of this technique will depend upon the underglaze and glaze you are using.

One approach is to mix a colored stain with a decorating medium.  A medium like CMC gum will help the stain stick to the glossy glazed surface.  You can mix in a little water as well to make the mixture more liquid and the consistency more even.  The mixture can be applied by brush or using a slip trailer.

If the underglaze mixture is made to the consistency of heavy cream, it creates a raised texture on the glaze.  It is a little like slip trailing in this respect.  Be mindful that if the stain paste is too thick it can blister off during firing.

If the pottery is then fired at a lower temperature, the underglaze will fuze to the glaze without melting fully.  As such the texture of the pattern remains on the pottery surface.

However, if the piece is fired to a hotter temperature, the glaze will melt again.  As a result, the underglaze melts into the surface of the glaze to create a smooth surface.

A Rose by Any Other Name

Some might argue that majolica isn’t really using underglaze on top of glaze.  Normally what is painted or trailed onto the glaze are stains mixed with a flux like Gerstley Borate.  However, if you are someone who has a wider definition of underglazes, you may think of stains as an underglaze.

Either way, there are some commercial underglazes that have been found to work well on top of a glaze.  These glazes include:

Be aware that the resulting piece will depend on the glaze base too.  Spectrum and Amaco do a range of glazes that are suitable for majolica work.
Some additional tips for using underglaze on top of glaze are:

Whilst some combinations of underglaze and glaze can work well, there are other parings that do not interact successfully.  The process of applying underglaze on top of glaze can be hit and miss with variable results.  This method is unpredictable, so it’s worth remembering that you can achieve a similar look using different techniques.

Overglaze, an Alternative to Underglaze on Top of Glaze

Using underglaze on top of a glaze is not standard operating procedure.  As the name suggests, underglaze was originally designed to go, well, ‘under’ glaze.  If you are planning to try this out with any old underglaze and glaze combination, prepare for the unexpected.  It may work, or it may not.  However, you can approach it more scientifically and use underglaze and glaze known to tolerate this technique.  It depends if you prefer the more experimental or methodical approach. 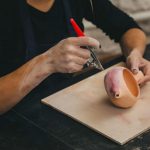 Dry Hands from Pottery Clay – 10 Tips for Skin and Nails 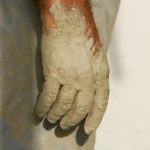