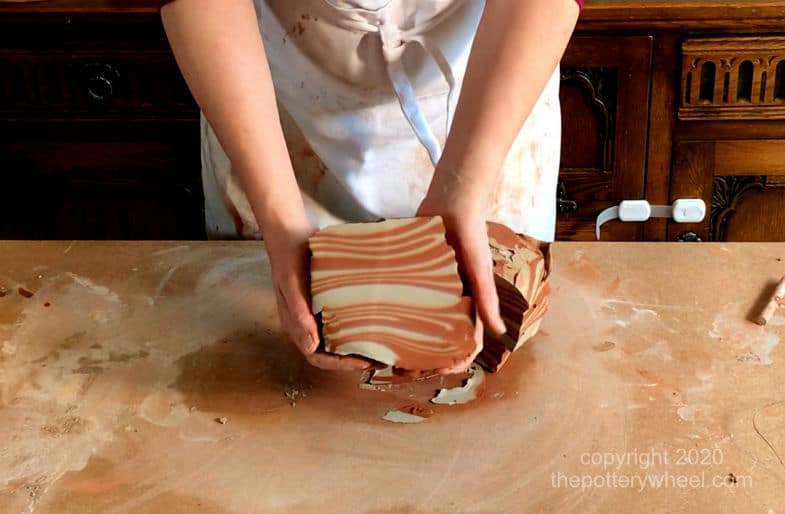 If you have any trouble with your wrists or hands you will probably find wedging clay difficult.  I have carpal tunnel in both hands, and I find most wedging techniques impossible.  Stack and slam wedging is a godsend for me and makes wedging a possibility.  Plus, it’s actually quite enjoyable!

Stack and slam wire wedging involves stacking one block of clay upon another and slicing through both blocks.  The sliced blocks are then sandwiched together and slammed on the table a few times to compact them.  These are then sliced down the middle again, and the process is repeated.

You can also check out YouTube for my full step by step video on stack and slam wedging.

Often when potters work, they will end up with bags and buckets of clay with different consistencies.  My workspace is full of different bags of clay.  Some of it is soft and mushy and some of it is a bit too dry to use.

Stack and slam wedging is great for blending different clay bodies.  If you have different types of clay, you can mix them together provided they fire at the same temperature.

Stack and slam wire wedging is great for mixing clay bodies for a few reasons.  If you want a marbled effect, you can stop short of completely blending the clay.

This method of wire wedging gives you distinct layers in your clay.  So it’s good if you want to experiment with agateware.

However, if you want to blend your clay completely, you just carry one wedging until the layers are not visible.  Stack and slam wedging is the most efficient way of blending clay and you will be done in no time.

This is fine if your wrists are up to it.  But if you have any issues with your hands such as carpal tunnel or arthritis, it’s almost impossible.

Wedging Clay the Stack and Slam Way -Step by Step

Stack and Slam Wedging With a Hand Held Wire Cutter

Shape your pieces of clay into two blocks of roughly equal size.  You can do this by simply dropping the clay onto your wedging table until it is in a block shape.

The blocks don’t need to be exactly the same size.  You may want to wedge a scrap of one clay with a larger amount of another.  However, it’s a little easier to get started if they are somewhat similar in size.

You can wedge small quantities together.  However, stack and slam is also really good for wedging clay of quite large quantities.

Throw one block onto your wedging table.  If your wrists are good, you can bring it down quite heavily on the table.

Some potters bring their hands down and smack the clay onto the table with their hands.  This is fine if you don’t have wrist issues.

However, if you have problems with your wrists or hands, you can just fling the block at the table.

When you fling it, you let go of the clay before it smacks into the table.  This way you are saving your wrists from the impact of the slamming action.

If flinging is too much, you can just drop the clay onto the table.

Then throw the second block of clay on top of the first.  So that they are stacked on top of one another.

Pick up the stacked pieces of clay and fling them together onto the table a couple of times.  Turn them over between flings so that both sides get a bit of impact.

Slide your wire cutter underneath the stacked blocks and slice through the clay completely.

Take one-half of the sliced clay and slam it down on the table again.  Then slam the second half of the clay on top of the first to create a 4 layered stack.

Using your wire cutter, cut completely through the stacked clay layers again.  Repeat the above process by slamming one section of the sliced clay onto the table. And, then slamming the second section on top of the first.

One of the reasons for wedging clay is to align its particles.  The clay platelets will be more aligned if the layers are all in parallel.  This will make it easier to throw the clay.

As you continue this stack and slam process, the layers will become thinner and thinner as the clay blends together.

I tend to slam the clay on the table a few times between slicing.  The reason I do this is to keep the stacked clay square.  If I just drop it a couple of times, the stack gets taller and thinner, and harder to work with.  By slamming it a few times I can compact it down to a stout block.

Continue the process until there are no visible layers in the clay.  Check for air bubbles and any areas of clay that have not been mixed sufficiently.  Air bubbles in your clay may contribute to it exploding in the kiln.

It doesn’t take long before the clay is completely mixed.  This batch only took about 10 minutes.

An alternative to using a handheld wire cutter is to mount some wire at an angle to your table.  This arrangement can speed up the stack and slam wire wedging quite a bit.

The wire is attached to your table at around a 45-degree angle.  You can buy a wedging table with a cutting wire already attached.  However, it is relatively easy to make one yourself.

With a mounted wire cutter, you simply pull the clay through the wire to slice it in half.  The process is then exactly the same as the wedging clay with a handheld wire cutter.  The only difference is that you are cutting the clay by drawing it through a mounted wire.

This setup can speed up the wedging process quite a bit.  Some potters can pick up quite a head of speed once they get going.

I’d like to have a mounted wedging wire, however, I have a 3-year-old toddler running about.  And a tantalizing taut wire waiting to be twanged by little fingers is not the safest arrangement.  So, for now, I’m sticking with the handheld option.

Another Way of Wedging Clay with Hand Held Wire:

I’ve also seen potters use another method of wire wedging to mix two batches of soft and hard clay.

This process involves the following steps:

If you are blending clay that is two different colors, you can stop wedging before the clay is completely blended.  This will give you a marbled effect when you are throwing the clay.  This is one of the techniques used for agateware.

Wedging clay is unlikely to become any potter’s favorite part of the day.  However, the stack and slam wire wedging method is speedy and efficient.  And once, you get into a flow, it can feel quite satisfying.  All that slamming is a good way to get your frustrations out.  And it’s cheaper than therapy! 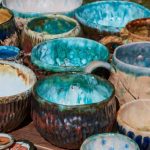 Oxidation and Reduction in Pottery – Made Simple!

What is Flashing in Ceramics – And How is it Done? 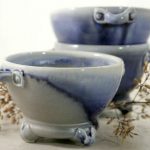 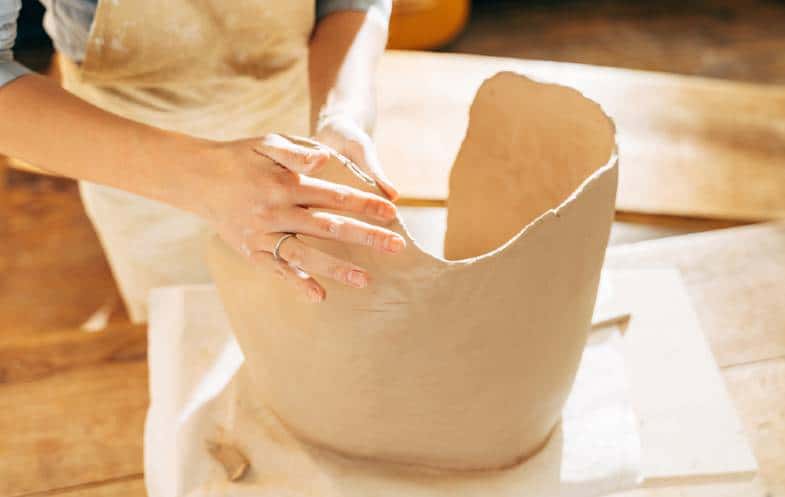 The beauty of hand building pottery is that you can get started without having to fork out for a lot of costly pottery equipment.  It helps to have some basic tools but you can improvise with most of these and use items you have around your home. The other appeal of hand built pottery is… 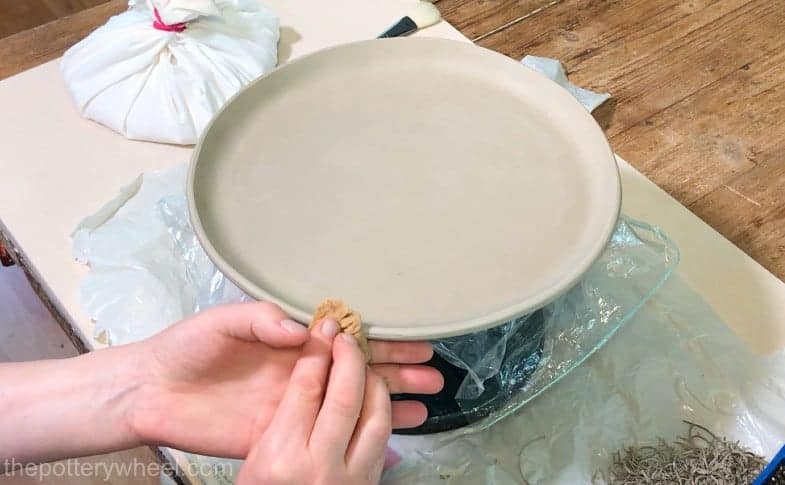 Slab plates are easy and very satisfying to make.  This is a simple step-by-step guide on my 3 favorite ways of making slab plates.  These are straightforward techniques and you will be able to make your plates at home with ease. The three techniques that I will be looking at are: The freestyle hand shaping… 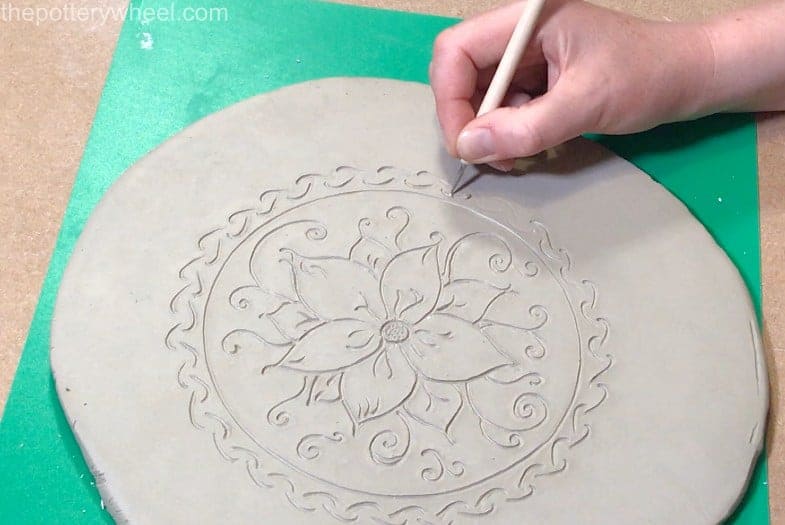 Texture Mats for Clay – How to Make a Clay Texture Mat

I love adding texture to pottery clay and there are countless ways to do this.  However, one of the simplest and most satisfying ways to add some interest is to use texture mats for clay.  These are pieces of flexible rubber that have a texture on them.  They can be pressed onto your clay to…