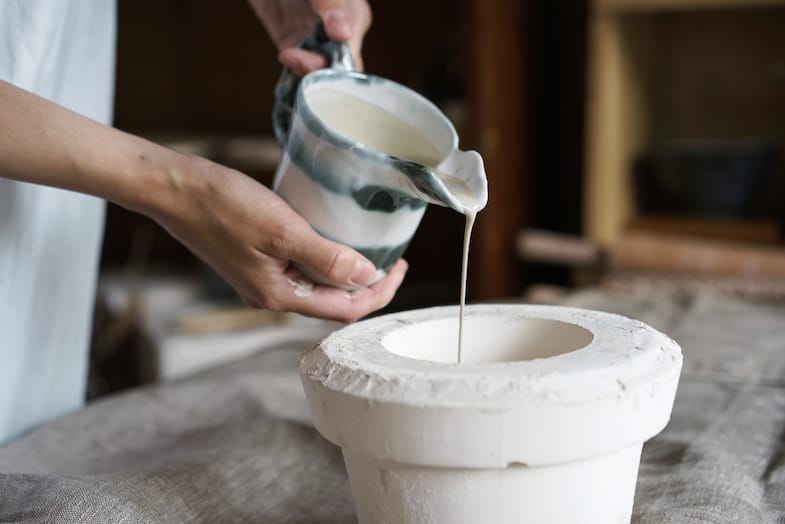 I have used clay slip often before whilst making sculptures to stick pieces of clay together, but a potter mentioned to me recently that slip has many uses.  So, I did a little research and this is what I have found out about the other uses of slip in pottery.

Slip consists of clay particles suspended in water.  Its consistency will vary according to use, ranging from thick cream to butter milk.  It can be used to bond pieces of clay together, to decorate and protect pottery or it can be poured into a mold and used to cast objects.

What are the Uses of Slip?

Broadly speaking, slip is used for either decorating pottery, protecting it, using it effectively as a glue to paste pieces of pottery together, or using it to cast in a plaster mold.  This article looks at each of these uses in turn.

In pottery, pieces of clay sometimes need to be joined to each other.  A handle on a cup for example.  The way this is done is by scoring (scratching marks in) the edges that need to be joined, thereby creating a key.  Then liquefied clay is pasted onto the two edges before pressing them together.  This creates a bond.

The Liquified Clay is Called Slip

The liquefied clay is called slip.  Sometimes the words slip and slurry are used interchangeably.  However, it is also argued that technically slip is thinner than slurry.  And that slurry is actually the particular kind of thick, gloopy slip that is used for bonding pieces of clay.

Generally, slurry that is used for joining pieces of pottery consists only of particles of the clay being used in the pot itself suspended in water.  This is important because different kinds of clay shrink and vitrify at different rates.  If you join pieces of clay together with a slurry that has a different shrink or drying rate to the pot itself, the join may not be very strong.

There is no particular hard and fast ratio for clay to water for joining clay.  How liquid the slip needs to be will depend on how wet your clay pieces are.  If the clay is still relatively wet the slip does not need to be too thick.  However, when the clay has begun to dry out, then the slip needs to be thicker in order for the pieces to key into one another.

Slip for joining clay is sometimes called ‘joining slip’.  It can be bought or made.  However, it is a good idea for the slip to be have the same clay body as the pot itself.  Therefore, it is often recommended that the potter makes the slip themselves.

Slip for Decoration in Pottery

Slip is also used to decorate items of pottery.  The term engobe is used to describe a clay slip coating that is applied to the body itself.  This can either improve the texture of the item or add color.  Engobe is opaque and can be white or colored.  Colored engobe usually contains stains and metal oxides.

Engobe is different from slip in that it has a lower clay content than slip.  It also contains more silica and flux than regular slip.  This means it shrinks less than slip when it dries.

Some people claim that engobe is half way between being a slip and a glaze.  Fired engobe surfaces have a bit of a sheen that fired slip surfaces do not have.  Others, state that engobe and glaze are quite different.  They point out that if an engobe creates too much of a glazed effect, it loses its opacity, which is its most important property.

How is Engobe used?

Engobe generally needs to sit on the clay relatively smoothly rather than forming lumps.  Application can involve either dipping the item in the engobe or painting it on.  It is sometimes called underglaze and a glaze can be applied on top of the engobe.

It can either be applied to leather-hard clay, which is clay that has not yet been fired in a kiln.  Or it can be applied after bisque firing and before a glaze.

Also, engobe has a low drying shrinkage.  Simply put this means that when they dry the do not shrink too much.  This is helpful because it means that they can be applied to dry pieces of clay.  If a slip shrinks a lot on drying, then it as it dries it will peel or crack off the piece of clay.  The upshot of this is that it won’t work as an adequate cover.

What is Colored Slip in Pottery?

Colored slips are made from regular clay slip which consists of clay particles in water, mixed up with metal oxides.  For example, adding cobalt carbonate to regular slip creates a blue finish on the pottery.  This can then be given a transparent glaze.

What is Slip Trailing in Pottery?

Another way of using slip to decorate pottery is called slip trailing.  In slip trailing, slip with a relatively high clay content is applied to a piece of pottery.  It is applied with an applicator to create textured patterns.

The slip can either be dribbled or squeezed onto the piece when it is leather hard using the applicator.  Often potters will use something called a bulb syringe.  The bulb syringe is has a narrow nozzle dispense tip with a rubber bulb which contains the slip.

Getting the right ratio of water to clay in slip trailing can be a matter of trial and error.  If the slip is very thick it can leave little sharp ends at the end of a trail.  A little like the pointed end of a meringue when it comes out of the piping bag.  You can get rid of the points by pressing them down once the trail has begun to dry out but is still soft.  Or you can use a slightly more liquid slip to avoid creating the sharp ends in the first place.

Generally, potters use translucent or clear glazes after slip trailing as an opaque glaze can obscure the detail of the slip trail.

What are Flashing Slips in Pottery?

With modern kilns, the firing environment is more consistent.  This means that potters can try to reproduce the organic look of a flashing by using flashing slips.  For example, slips containing alumina react (or flash) to an atmosphere that contains salt (soda) and ash.    Flashing slips are thin, with the consistency of milk and are applied to bisque ware.

Have a look at this great video by Leach Pottery in St Ives, Cornwall, UK.  Demonstrating the beautiful results of soda firing.

A final point to make about using slip to decorate pottery, is that pottery that has been decorated by slip is sometimes referred to as ‘slipware.’  This term tends to be restricted to pottery items where the slip has been applied in a pattern either by a brush or another implement as in slip trailing.  If the slip has been applied to an entire item, through for example dipping, it does not tend to be referred to as ‘slipware’.

Another purpose of pottery slip is that it can afford the piece some degree of protection.  Some slips will have a slightly hardening effect and will reduce the permeability of the pottery a little, not unlike a glaze.

What is Slip Casting?

Another use of slip is called slip casting.  In slip casting, a relatively thin slip (perhaps the consistency butter milk) is poured into a plaster mold.  The plaster mold then absorbs the liquid from the slip.  The clay in the slip then shrinks away from the side of the cast and can be removed still retaining the shape of the cast.

The slip is poured into the plaster mold.  Enough time is then left for the layer that is in immediate contact with the mold to become relatively solid.

The plaster mold can be washed off (the slip is water soluble) and reused.  Therefore, slip casting is a good way of making multiple copies of the same item.

Like many pottery terms, the word slip can be used variously by different potters and artists.  For example, some potters use the terms slip and slurry interchangeably.  Other potters are talking about a specific, relatively thick kind of slip when they refer to slurry.

None the less, it seems clear that regardless of what terms are being used, the use to which slip is being put, will determine what consistency and ingredients are needed.

The short answer to the question, what is slip in pottery, is that slip can be used for joining pieces of clay together, decorating and protecting pottery pieces, and for slip casting.  However, each of these functions will have their own different slip recipes.

Regardless of how closely the recipe is followed, using slip is a little like baking and you are never 100% sure of what will come out of the kiln when a piece has been fired.  This is part of the beauty and appeal of making pottery, each piece is unique and surprising. 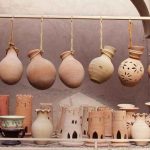 What is Bisque in Pottery? 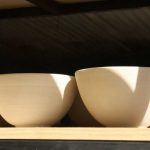