What is the Recommended Raku Firing Temperature?

Raku pottery is often fired up to cone 06, which is around 1852F or 1011C.  However, sometimes potters will raku fire at temperatures as low as 1461F (794C) which is around cone 016.  It depends on the glaze you’re firing, the raku technique being practiced, and the kiln being used.

Probably the most common firing temperature for raku is around 1852F or 1010C.  One of the reasons for this is that lots of glazes mature at this temperature.

When I started raku firing, I used commercially made raku glaze.  And the manufacturer’s specifications advised me to fire to 1852F (1010C), so that’s exactly what I did.

When you first learn to raku, it can feel a bit daunting.  I felt I had so much going on during firing, I wasn’t in a position to start experimenting with temperatures.  I just did what the glaze bottle told me to do, which is fire to cone 06.

Raku firing is very active and hands-on.  And when you are starting out, it has a ‘hold onto your hats’ quality about it.  At first, I was focused on getting the kiln up to temperature, and getting the pots into the reduction chamber.

However, once I’d got a bit more confident, I started to experiment a bit with glazes and target temperatures.

You might be wondering what accounts for this variation.  So, let’s take a look at some of the variables at play….

There are a few factors that affect the right raku firing temperature to use.  Here are some of these factors:

1) The Glaze you are Using

If you are starting out making raku pottery, you may want to try a commercially made raku glaze first.  The results you get with a shop-bought raku glaze do differ each time.  That’s the nature of raku.

However, with a ready-made glaze, at least the performance of the glaze is tried and tested.  There is a lot that’s unpredictable about raku firing pottery.  So, wanting to use a stable glaze, at least when you start out, is understandable.

You will find the recommended target temperature on the back of the container.  With commercially made raku glazes, the temperature usually ranges from around 1850-1915F (1010-1045C) depending on the glaze.  This is equivalent to around cone 06 / 05.

However, you aren’t restricted to using specially made raku glazes.  You can experiment with other low fire glazes too.

Raku firing is a glost firing process (The Potter’s Dictionary, F & J Hamer, 2016).  Glost firing is a term that comes from the industrial production of pottery.

At some point, you may want to start experimenting with making your own raku glazes.  So read on….

Making your Own Raku Glaze

If you refer to a glaze book, like The Glaze Book by Stephen Murfitt, you will find lots of raku glaze recipes.  And helpfully, he does include a suggested temperature firing range for each individual recipe.

2) The Kiln you are Using

Your raku firing temperature is partially determined by the kiln you are using.  You can buy a raku kiln that is specifically designed for raku firing.  These often have a ‘top hat’ design.  With a top had design you lift the lid off the kiln with a pulley once you have reached temperature.  An example of this is the Olympic Raku Kiln.  These kilns are designed for raku, but they can also fire up to 2350F (1300C)

However, if you have made a DIY raku kiln, it may be a struggle to get up to those temperatures.  This depends on the design of your homemade kiln.  Nevertheless, on the whole, these are much less efficient than a commercially made kiln.

So, the range of your raku firing temperature does depend on the equipment that you have.

There are a number of different raku techniques, and potters tend to have different firing temperatures for each of them.

Potters often have a lower raku firing temperature when making horse hair raku.  There are a couple of reasons for this.

The first is that with horsehair raku, you take the pot out of the kiln and apply the horsehair.  Unlike most regular raku that goes into a hot reduction chamber, horsehair raku cools in the open air.

This increases the chance of the pot cracking through thermal shock.  If you fire your pots to around 1025F (550C), this is hot enough to burn the hair.  But it is just below the temperature of the quartz inversion, where pots are most vulnerable to cracking.

However, a higher incidence of cracking isn’t the only reason for doing horsehair raku at a lower temperature is.  If you put horsehair on a very hot pot, the hair burns away before it sticks to the pot.

Temperatures up to around 1400F (761C) should be low enough for the horsehair to adhere.  This is approximately cone 017.

Naked raku is a process in which a thick slip painted on the bisque pottery.  When the slip dries in the kiln, it cracks.  Areas of the pot are protected by the remaining slip.  And some areas are exposed where the slip has cracked away.  When this is put in a reduction chamber, the exposed parts of the pot become blackened through carbonization.

Normally a temperature of around cone 015 is enough for the slip to shrink and crack.  So the typical raku firing temperature for naked raku is around 1450F (787C).

How to Gauge the Raku Firing Temperature

A lot of potters, myself included, use a pyrometer to monitor the temperature of my raku kiln.  Some potters rely on the appearance of the glaze.  They look through the flue on the kiln and check what the glaze looks like.  At some point, the glaze will bubble up and boil.  Then once it is maturing, it will settle down and take on a shiny wet appearance.

I have to say that when I’m making raku, there is no way I can see that clearly inside my kiln.  Even with kiln googles, the flue on my kiln gives off too much heat for me to look inside.  So, I rely on my pyrometer, and it serves me well.

Raku is a low fire process, that in general terms has a target temperature of around 1823F (995C).  However, I hope this article has shown that there is no right or wrong raku firing temperature.  There are different factors that affect the best temperature to fire to at a given time.  In his wonderful book ‘Raku, A Practical Approach’, Steve Branfman says:  “It may be a cliché to say that raku is different things to different people, but it is true”.  I think this sentiment is a good one to bear in mind on your raku journey. 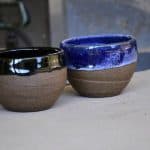 What is the Second Firing of Clay Called? – Glaze or Glost?

How Do Kilns Work? – All about How Pottery Kilns Fire Clay 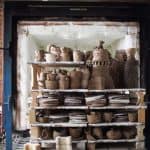