Frozen Clay and Glaze – Can it Be Used and What to Do? 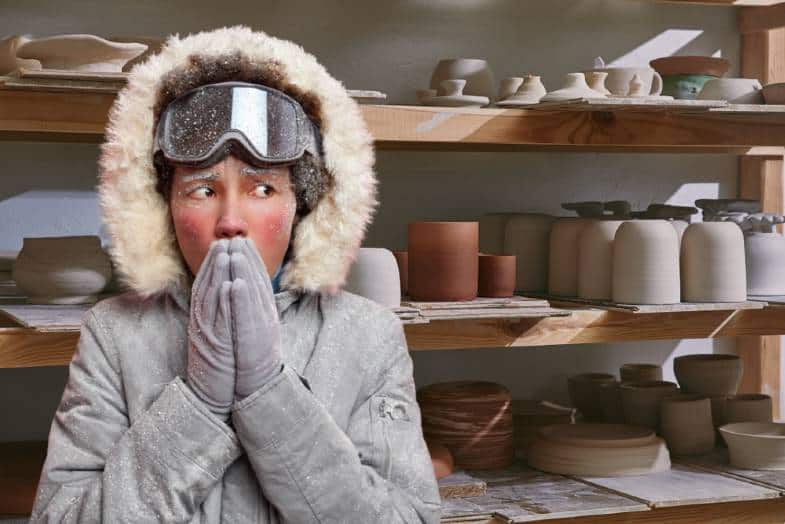 If you work in a cold pottery studio or workshop you may have encountered the problem of frozen clay and glaze. When exposed to frigid temperatures, such as the winter climate, clay and glazes tend to freeze. This is because they have moisture as a component. Moisture, which is basically water, expands to form crystals when they freeze.

The expansion of moisture to form crystals causes internal stress within the clay particles, causing them to crack, and harden. The cracking is also due to the fact that water separates from solid materials when frozen.

Now, it is difficult and nigh impossible to use clay or glazes in their frozen form. Fortunately, they can both be revived into a reusable form. Even so, glazes are easier to bring back into a workable shape than clay. Read on to find out how.

The basic layout of clay is made up of tiny particles layered together, held in place by moisture. Essentially, water makes up a big percentage of moist clay, about 30-40%. It is what makes the clay workable.

When the temperatures reach freezing point, the water crystallizes and becomes icy. Once the water freezes, it separates the clay particles and expands, causing the clay to crack or chip.

However, as we shall see later in the article, this does not mean that the clay is damaged. Upon restoration, the clay can be just as good if not better than it was before. It disintegrates once it thaws, but it can be recycled. After all, clay has undergone many years of erosion, freezing, and thawing in its natural setting.

Can You Use Clay or Glaze That Has Been Frozen?

Many people, especially amateur potters, assume that once clay or glaze is in frozen form, it is only as good as damaged goods. Some even toss it away. However, that should not be the case. While you cannot use the clay while it is hard and cracked, there are ways to bring it back to the same condition as before getting frozen, if not better.

So, to answer this question, yes, you can use clay or glaze that has been frozen. You simply have to thaw and wedge them back into usable condition.

As we have already established, usable clay and glaze are those that are mixed well with moisture. The water that makes clay workable is known as free water. Therefore, when clay becomes hard and cracks due to cold temperatures, it is the free water that freezes.

What changes in frozen clay is the physical distribution of the moisture in the clay, which is more or less the same phenomenon as when fluffy and dry snowfalls to the ground only to become solid in a short while. In other words, frozen clay and glaze can be reversed back into a workable form.

How To Restore Frozen Clay and Glaze?

Thawing out frozen clay and glaze is the first step towards restoring them. Generally, thawing happens when the clay and glaze are at a temperature warm enough that the frozen water crystals begin to melt, and the clay starts softening up.

To make the process a success, see to it that the clay platelets are evenly mixed again. To achieve this, wait it out until the clay or glaze is completely thawed. Then work on getting rid of the excess water from the thawed clay.

Next, spread the clay on a plaster bat, rotate it, and flip it until the clay is consistent and homogenous. Generally, the degree of restoration of frozen clay depends on the percentage of the frozen clay.

Another method of restoring frozen clay is wedging. With this, you ought to lay different sections of the clay atop each other, religiously alternating between the hard and the soft clay. After laying them up, cut the clay and repeat the layering procedure until you end up with a homogenous mixture. The wedging method helps to remove air in the clay until it is in good condition for modeling.

As we had mentioned earlier in the article, glaze is easier to thaw and restore than clay. Once it softens, use a mixer on a drill for about ten minutes to bring it back to dipping consistency. Alternatively, you could strain it through a sieve.

How To Prevent Clay and Glaze from Freezing

The best way to keep clay and glaze from freezing is to store them in a warm environment. This could be a location with controlled temperatures all year long, especially during winter. However, it can be challenging to store large amounts of clay and glaze in this manner, so the following are the most feasible alternatives:

If the above methods do not work for various reasons, such as extremely cold temperatures, the clay and glaze will freeze. So, you will just have to restore them when it gets warmer.

At What Temperature Do Clay and Glaze Freeze?

Since clay is made up of free water, it follows that clay will freeze at the freezing point of water, which is 32F. It is at this temperature that water starts separating from clay particles to form crystals.

When exposed to extremely cold temperatures, clay and glaze will freeze. Typically, clay freezes at the freezing point of water, which is 32⁰F. Glaze, due to the contaminants in its formula, requires a lower temperature to start freezing.

While you can’t use frozen clay and glaze in their solid frozen state, it does not mean they are damaged, so maybe hold off tossing them. They are restorable and can get back into workable states when they thaw out. Frozen glaze is easier to restore than frozen clay. 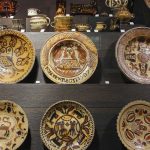 Slipware – Where Does it Come From? and How is it Made?

Pottery Wheel for Beginners – 14 Tips on Buying a Wheel 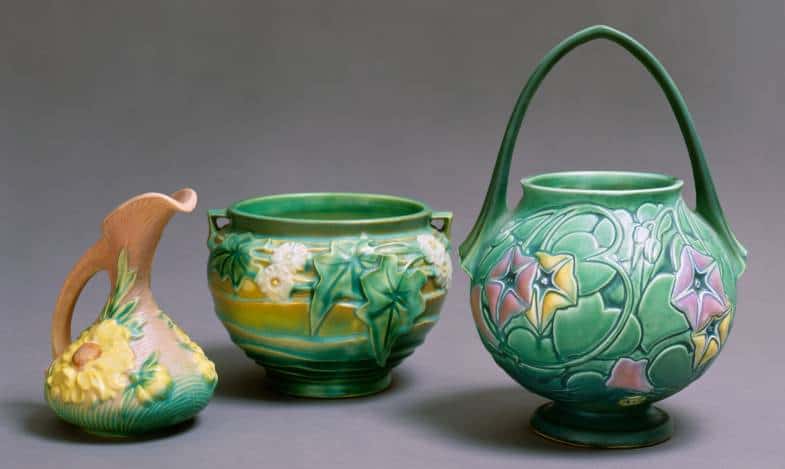 It’s beautiful and highly prized, but is Roseville Pottery valuable? Here are 6 key factors that affect the value of this lovely pottery. 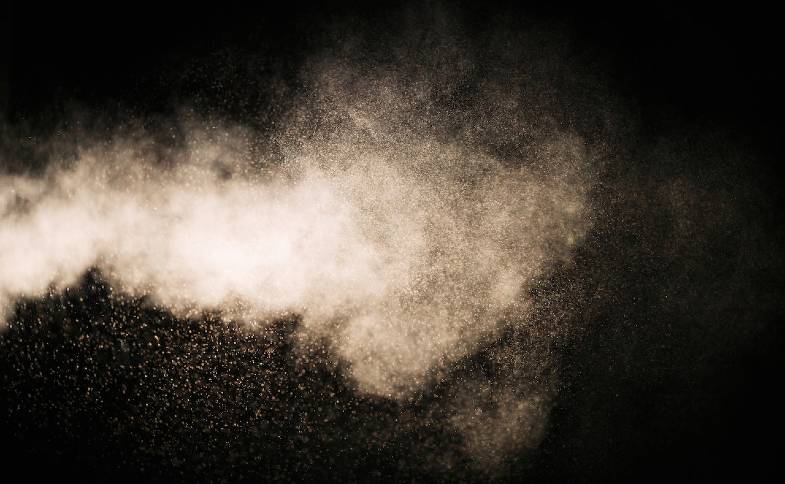 How Long Does Silica Dust Stay in the Air? Pottery Issues

Silica dust is a real concern for lots of potters. But just how long does silica dust stay in the air, and how concerned should you be?

Slab pottery is very versatile.  Slabs can be used for anything from dainty ceramic earrings to huge garden planters.  So, I thought I’d put together a list of my favorite slab pottery ideas.  I hope you find these projects as inspiring as I do. Slab Pottery Ideas I’m aiming below to give you an overview…