How Long Should Glaze Dry Before Firing? Drying Pottery Glaze 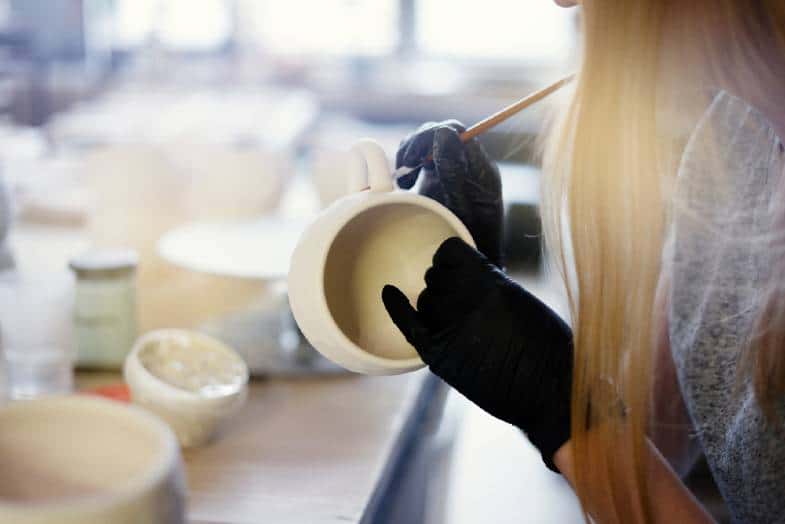 When I first started glazing my own pottery, I wondered how long should glaze dry before firing?  I was well aware that greenware can explode in the kiln if it is fired when damp.  But what about glazed bisque ware?  Glaze contains water, so does that water need to be given time to evaporate before firing?

Some potters will put their glazed ware straight into the kiln and fire it immediately.  However, glaze contains water, and this is absorbed by bisque ware when glaze is applied.  Ideally, leave your pottery overnight after glazing to allow this water to evaporate.  Or add a pre-heat to your firing schedule.

I’ve found that there are as many opinions about firing pottery as there are potters.  Potters have their own ways of firing pottery and preparing their ware for the kiln.  So, if you ask different potters, you will get different answers about best practices.  This seems to be particularly the case in relation to glazing and firing.

If you are new to firing pottery, this mixture of information can feel a bit confusing.  So, let’s have a look at the arguments on either side and consider how long should glaze dry before firing.

How Long Should Glaze Dry Before Firing?

Table of Contents show
1 How Long Should Glaze Dry Before Firing?
1.1 Reasons for Firing Pottery Straight After Glazing
1.1.1 1) Bisque Ware is More Porous than Greenware
1.1.2 2) Water From Glaze is Superficial
1.1.3 3) Glaze Firing Schedules are Relatively Slow
1.1.4 4) Newly Applied Glaze is Fragile
1.1.5 5) Meeting Deadlines
1.2 Reasons for Allowing Pottery Glaze to Dry Before Firing
1.2.1 1) Not all Glazes Like Being Fired when Damp
1.2.2 2) Kilns Do Not Like Moisture
1.2.3 3) Speeding up The Drying Process
1.3 How Long Does it Take for the Glaze to Dry?
1.4 Final Thoughts

As I mentioned earlier, some potters will fire their pots straight after glazing.  These are some of the reasons that this practice is used by some:

During a bisque firing, the chemical structure of the clay changes and it becomes brittle and porous.

Unfired clay is denser than bisqueware and it takes longer for moisture to evaporate from greenware.  Also, some of the moisture in greenware is chemically bonded to the clay particles.  It takes time for this chemical bond to be altered and for water to be driven out during the bisque fire.

By contrast, bisque is porous.  Moisture that is absorbed by bisque ware during glazing can evaporate quite quickly and easily.

2) Water From Glaze is Superficial

The water absorbed by pottery when glaze firing is quite superficial.  This is because the process of applying the glaze is quick.

If bisqueware is submerged in water for a long time it will absorb a lot of liquid.  However, most of the time glazing is done rapidly.

If you are dipping your pottery in glaze, you hold it in the glaze for a matter of seconds.  And if you are brushing your glaze you have to be quite speedy.

This is because bisque is quite absorbent, and will draw water out of the glaze quickly.  So, when you brush on glaze, you can’t linger too long with a brush that holds a lot of liquid.

Therefore, when you apply glaze, the amount of water being absorbed is relatively small.  And the water that is absorbed tends to be sucked up into the ceramic surface.  Rather than being drawn into the deeper layers of the pottery.

On a related note, if you airbrush your glaze on, even less moisture is absorbed by the bisque ware.  When you airbrush glaze, you are almost spraying the pottery with a mist of powder rather than a liquid.

Most glaze firing schedules are slow enough, particularly at the start to let any moisture evaporate.

Because the water from the glaze is superficial and the bisque is porous it evaporates easily.  And usually, the temperature in the kiln is ramping up slowly enough to allow this evaporation to happen.

An exception might be a fast raku fire.  But even then, a lot of potters recommend keeping the heat rise slow at the beginning of a raku firing.

When glaze is freshly applied it is powdery and fragile.  If it’s sitting around in your studio waiting to be fired, the surface is more likely to be damaged.

Plus, it will be gathering dust.  It may be safer for your pots to fire them and get them out of your busy pottery space.

If you are busy and have deadlines to meet with your pottery, you may not want to wait around.

This is true whether you are a production potter or a student with an art assignment deadline.  Or perhaps you just want to get those pots out for sale or in the post.

Either way, waiting hours for glaze to dry completely does expend valuable time.

Reasons for Allowing Pottery Glaze to Dry Before Firing

As the above suggests, there are good reasons to suggest pottery can be fired straight after glaze is applied.  But, there are also reasons for holding off and letting the moisture evaporate.

Some glazes will cope well with being fired straight away, and they won’t experience any adverse effects.  However, not all glazes do well.  You might find that some of your glazes will ‘crawl’ if they are put in the kiln when still damp.

Crawling is when the glaze crawls away from patches of the bisque clay.  The glaze balls up or pools on certain areas of the pottery, and other patches are left bare and unglazed.

The only way to know if your glaze will crawl if fired when damp is by testing it out.  And you may not want to take the time to do that.  It may just make more sense to let the glaze dry thoroughly.

Generally speaking, getting moisture in the kiln is best avoided.  Even clay that is bone dry will contain a bit of mechanical and chemically bonded water.

It’s important to let this moisture out of the kiln.  This is because having a damp atmosphere in the kiln chamber is not good for the kiln elements.

Firing glaze that is still a bit damp is unnecessarily introducing more moisture into the kiln which could be avoided.

3) Speeding up The Drying Process

You can speed up the process of drying glaze if you are in a rush.  One way to do this is to use a hairdryer.

Or if you have one you can use a specially designed drying torch called a “heat gun”.  A good example of this is the Master EC-200 Heat Gun.

Another option is to put your pots on a hot radiator if the radiator has a flat top.  This can dry out any residual moisture, particularly on the inside of a mug or bowl.

However, if your piece is large, for example, a large vessel or sculpture this may not be an option.  Plus, it’s worth remembering that it takes a lot of glaze to cover a large piece.  And lots of glaze means lots of liquid.

If you have glazed a large piece, it’s really worth waiting until the water from the glaze has evaporated.

So, if you are wondering how long should glaze dry before firing, the answer will depend upon whom you ask.

Some potters argue that you don’t need to wait at all.  Others recommend letting the moisture from the glaze evaporate before firing.  I have to admit, I’m in the latter category.  I tend to err on the side of caution.

How Long Does it Take for the Glaze to Dry?

If, like me, you want to let your glaze dry, then exactly how long should glaze dry before firing.  The amount of time it takes for glaze to dry depends upon how cold your room is and how humid the atmosphere is.  But, generally speaking, leaving your glaze to dry overnight, will be a more than adequate length of time.

Glaze is often touch-dry very quickly.  Water is sucked out of the glaze suspension by bisque, leaving a layer of powdered glaze on the pottery surface.  However, to ensure that the moisture drawn out of the glaze has evaporated, it’s best to leave it overnight.

I’ve found that sometimes making pottery is a matter of trial and error.  Potter’s often have different opinions, and sometimes you just have to weigh up the arguments and try it out.

Should glaze dry before firing?  My thinking is that yes, it should in an ideal world be left to dry overnight.  Essentially, if you have time to let it dry out, then ideally, you should let it dry.  However, firing freshly glazed ware is not as risky as firing damp greenware 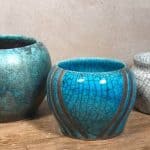 How to Seal Raku Pottery – Can Raku be Waterproof or Food safe?

How to Glaze Pottery at Home – With or Without a Kiln 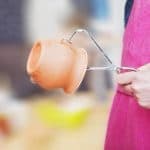