How Long do Kiln Elements Last? – How Many Firings? 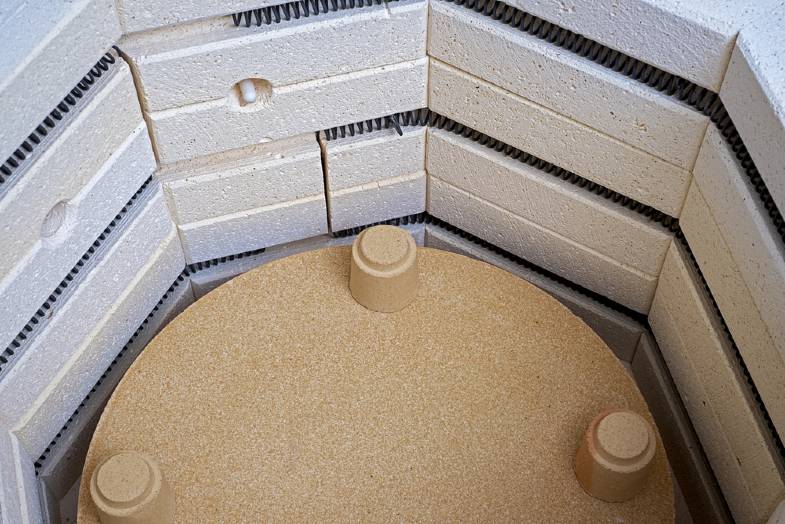 One of the inevitable costs of owning a kiln is changing the elements now and then.  But how long do kiln elements last?  And how much will it cost each time you need to change them?  These are good questions if you’re trying to work out how much it’s going to cost to maintain your kiln.

There is a big difference between 100 and 200 hundred firings.  And you may be wondering why some elements last longer than others.  But before we look at the factors that affect element life, let’s look at why elements need to be replaced.

Why do Elements Need to be Replaced?

Elements are made of coiled metal, and they heat up as an electric current passes through them.

Most kiln elements are made of a blend of chromium, aluminum, and iron.  These are known as Kanthal A-1 elements and they are the most common elements used in pottery kilns.

When the elements of a kiln heat up to around 1832F (1000C) a couple of things happen.  Firstly, they become soft and bendy, like cooked pasta.  Secondly, the aluminum on the surface of the element begins to oxidize. (source)

The oxidization of aluminum is a process of corrosion.  When aluminum becomes corroded in this way, a white chalky coating forms on the element.  This is sometimes called grain growth.

This white powdery surface on your elements is a good thing.  The oxidized layer provides a protective shell around the element.  The layer is dense and prevents the metal underneath from further oxidization.

Ideally, this initial oxidized layer has an even thickness and is well bonded to the underlying metal element.  One way to achieve this is to fire your kiln when it is empty when the elements are new.

When pottery is fired in a kiln, it gives off gases and chemicals.  This can cause the initial protective oxidized layer on the elements to form unevenly.

If you fire the kiln when it’s empty, the layer is more likely to form evenly.  This is a little like seasoning the elements before you start firing pottery in the kiln.

Seasoning your elements in this way will give them some protection.  Nevertheless, over time as the kiln is used for firing clay, the elements will continue to corrode.

Where cracks form, oxygen gets in and makes contact with the underlying metal, which then oxidizes.  This additional oxidization fills in the gap with more powdery crust that forms on the surface of the element.

As the crusty surface on the element gets bulkier, two things happen:

As the corrosion continues, the amount of resistance in the elements increases.  As such the kiln becomes less efficient at firing pottery.  Eventually, the elements need to be replaced.

There are a few factors that affect how quickly the elements of your kiln corrode and need replacing.

So, let’s take a look at those now, and consider the ways you can extend the life of your elements.

How Long Do Kiln Elements Last? – Factors to Consider

Here are some things that will have an impact on how often you will need to change your elements.

How Do You Fire Your Kiln?

The hotter the elements get, the quicker the oxidization process becomes.  So, firing at higher temperatures will cause your elements to corrode, and ultimately fail, quicker.

Elements start to oxidize at around 1832F (1000C).  Bisque and earthenware firing normally takes place around this temperature range.  So, when you are bisque firing or firing at earthenware temperatures, your elements will suffer from some corrosion.

However, at these lower temperatures, the amount of oxidization is minimal.  As a result, it takes a long time for the elements to become significantly corroded.

As such, if you are bisque firing or firing earthenware, you can expect the elements to last longer.  The average number of firings a set of elements can survive is 100-200.

So, when firing mainly at lower temperatures, you are likely to get 200 firings or more.  As a result, if you are firing your kiln twice a week, you can expect the kiln elements to last around 2 years.  Sometimes longer if you are lucky.

Likewise firing at temperatures above cone 6 will reduce the life expectancy of your elements further.  For example, if you fire at cone 10, it’s likely that you will get about 50 firings from your elements.

In addition to the temperature you fire at, your firing schedule will make a difference.  For example, if you’re holding your kiln at high temperatures, this will also cause the elements to corrode more quickly.  Some glazes, for example, crystalline glazes and oil spot glazes benefit from being soaked for longer periods of time.  This reduces the life of the element considerably.

What Type of Elements Are you Using?

Most kilns use Kanthal A-1 elements.  However, there are other types of kiln elements that are designed to survive higher temperatures better.

APM elements are made from metals that have been extruded, grounded up, melted, and then extruded again.  (source)

Because of the way that they are produced APM elements can withstand higher temperatures before melting.  They can also cope with long firing ramps and extended periods where the kiln is held at a high temperature.

For this reason, APM elements are often recommended if you regularly fire at cone 10 (2377F / 1303C).  Or if you are firing using specialist glazes like crystalline glazes that need to be held at high temperatures.

Other potters use elements with a heavier gauge.  Elements sit in grooves in the side of the kiln called channels.  If the channels in your kiln are large enough, they can be used to support elements with a wider diameter.

When elements heat up, they start to lie down flatter.  When this happens the distance between the coils lessens.  As such the coils heat up more and corrosion increases.  Thicker elements are stronger and are less likely to sag and flatten when they are hot.  As a result, they have a longer life expectancy.

How Powerful is Your Kiln?

How long kiln elements last also depends on how powerful your kiln is.  When a kiln draws less power, it can struggle to climb up to the necessary temperature.  Because it’s struggling it will take longer to reach temperature.

By contrast, if a kiln has more power then it will heat up more quickly.  So, the elements will spent less time at higher temperatures as the kiln creeps up to its target.

How to Tell if Kiln Elements Need Replacing

Here are a few ways to tell if your kiln elements need replacing:

When elements are starting to reach the end of their appearance will change.  They will start to sag, lean over and lie down.  So, a regular visual inspection will help identify their condition.

If your elements start to sag, you can secure them back in place with element pins.  This will prolong their life a little.  However, ultimately once, they start to bulge out of their channels, it’s time to think about replacing them.

2) How Long Your Firing Takes

Your firing schedule starts to take longer.  One sign that elements are working less efficiently is that it takes longer to reach your target temperature.

Whilst this is a helpful indicator it is not foolproof.  If your kiln is controlled by a digital controller, the computer will adjust the firing cycle automatically.

If your elements are taking longer to heat up, the digital controller compensates by leaving the elements on for longer.

When the elements have ramped up to a particular temperature, the controller turns the power to the elements off for a while.  This is designed to control the speed at which the temperature increases.

During firing the elements will cycle through being on and off as the controller adjusts the temperature of the kiln.  This works like a thermostat.

If the elements start to work less well, the digital controller will compensate by leaving the elements on for longer.  And having less time when they are switched off.

The result of this is that the elements are put under more strain. However, the overall length of the firing schedule may not increase much.

It is only when elements are in a very poor condition that the firing schedule becomes noticeably longer.

How to Make Your Kiln Elements Last Longer

Here are some ways to boost how long your elements will last:

The answer to the question, ‘how long do kiln elements last’ depends on a few factors.  Probably the most important factor is the temperature that you are firing your kiln at.  If you are using your kiln to bisque fire or you are firing at earthenware temperatures, your elements will last longer.  However, if you’re firing at temperatures of cone 6 or more, there are ways to make your elements last longer.  I hope this article has given you some ideas about how to prolong the life of your kiln elements. 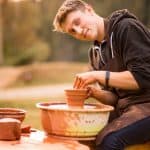 What Does a Potter Do? A Day in the Life of a Potter

Pottery Kiln for Beginners –12 Tips on Buying an Electric Kiln 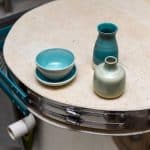